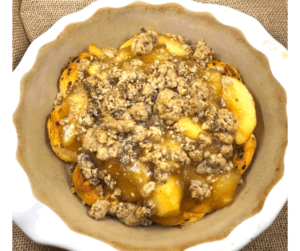 Doesn’t that look good! It’s so delicious, light and flaky, and the crust is awesome.

This is one of the easiest air fryer recipes, this makes a mean pie in a matter of minutes, less than 5 minutes, and you can have a great pecan pie tart (a slight version on Homemade Pecan Pie) on your table in less than 10 minutes, from start to finish.

Now, I used all prepared items to make this pie. This is my second time making the pie. The first one, my family ate way too fast to take a picture of it. It was fabulous, I served it with some homemade vanilla ice cream. And, to be honest, it might be one of the most delicious pies, I have ever eaten.

Next week, I will continue my journey into pies, because as my mother once said, it’s always time for pie~! 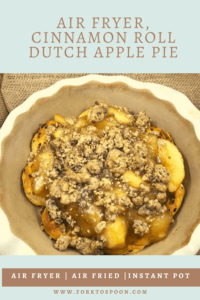 This is a take on my family’s favorite dessert, my mother, got the recipe off the Pillsbury website, years ago. It combines two of my kid’s favorite things, cinnamon rolls, and apple pie.