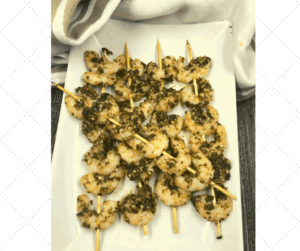 Air Fryer, Basil Pesto Shrimp Kebobs, Kabobs, this is one of the easiest recipes for shrimp shish kabobs,  it has a very easy marinade for shrimp kabobs, and it’s one of my go-to recipes when I need to get dinner on the table in a flash. I hope you and yours enjoy!

Being from Boston, my uncles were all fisherman. Therefore, I was treated to an abundance of seafood, over the years. There was really nothing better than my uncles dropping off the days’ catch to my mom, who would almost make something unbelievable. I look back at my uncle’s dropping off baby lobsters because no one would purchase them, now we all recognize them as chicken lobsters, and if they were free, there would be a line around the block, to obtain them. 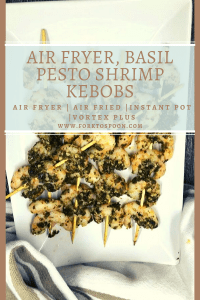 This is a very easy and simple recipe for basil pesto shrimp kebabs, feel free to make your own pesto, especially when fresh basil is available at your local fruit market.