Do Air Fryers Use Radiation?

By Laurie
FacebookTweetPin
Leave a Review 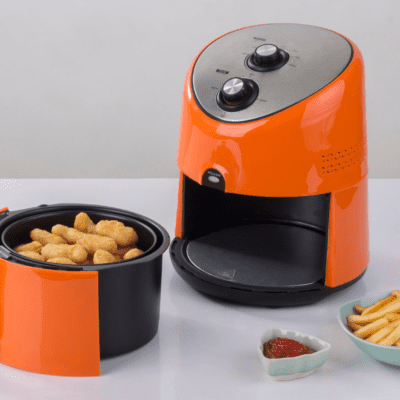 Do air fryers use radiation? This is a question that many people have, and there is no clear answer. Some say that the heat produced by an air fryer is so small that it does not produce radiation, while others say that any type of heating element produces some level of radiation. So what is the truth? Continue reading to find out!

Have you ever been curious about air fryers and their use of radiation? While air fryers do indeed use radiation, it’s not the type to be worried about. Radiation in air fryers is a form of electromagnetic energy, similar to microwaves and radio waves.

In air fryers, this radiation is used to heat up food quickly and evenly. So while air fryers do emit radiation, it is not harmful to your health and serves a practical cooking purpose. However, it’s important to note that air frying still uses oil, so it may not necessarily be any healthier than traditional frying methods.

It all comes down to personal preference and moderation in the end. Overall, air fryer radiation doesn’t have to be a cause for concern. Happy cooking!

Can air fryers cause cancer?

Many people turn to air fryers as a healthier alternative to deep frying, but some have questioned whether they might pose a risk for cancer. However, the short answer is that there is currently no evidence suggesting that air fryers cause cancer. In fact, air fryers do not use the same cooking method as traditional deep fryers, which involve immersing food in hot oil.

Instead, air fryers circulate hot air to cook the food, making them a lower-fat option. While it’s important to note that any type of high-heat cooking (including using an air fryer) can lead to the formation of cancer-causing compounds called heterocyclic amines, the level of these compounds found in food cooked with an air fryer is generally lower than those found in traditionally fried foods. So while it’s always important to practice healthy cooking habits and limit your intake of processed and charred meats, you can rest assured that your trusty air fryer is not causing cancer.

Despite decades of research, the exact causes of cancer are still not fully understood. What we do know is that it occurs when cells in the body begin to grow and divide uncontrollably. This abnormal cell growth can be triggered by a number of factors, including genetic mutations, exposure to certain substances like tobacco smoke or radiation, and even environmental factors like diet and stress.

What may cause cancer in one person may have no impact on another, and identifying an individual’s specific risk factors requires careful analysis and personalized medical guidance.

What is clear, however, is that there are lifestyle choices we can make to reduce our chances of developing cancer – such as avoiding tobacco products, maintaining a healthy weight through diet and exercise, and limiting exposure to harmful chemicals. Ultimately, more research is needed to fully understand what causes cancer, but in the meantime, we can take steps to lower our own personal risk.

Radiation and how to detect it

Radiation is a form of energy that can be found in nature, like the sun, or artificially created, like in X-ray machines. The radiation itself is not necessarily dangerous and is even used for medical treatments and diagnostic imaging. However, too much exposure can have harmful effects on the human body. How do we detect radiation?

Radiation detectors measure how much radiation an individual has been exposed to, as well as identify what kind of radiation it is. One common example is a Geiger counter, which uses a gas-filled tube to detect ionizing radiation. Radiation dosimeters are another type of detector that measures the absorbed dose of radiation over time and indicate if anything above safe levels has been detected. Radiation detection allows us to monitor our exposure and take necessary precautions to protect ourselves from harm.

How does an air fryer’s radiation concern compare to a microwave?

While air fryers and microwaves both use some form of radiation to cook food, their exact processes and levels of radiation differ greatly. Microwaves emit electromagnetic radiation, which causes water molecules in the food to vibrate and raise the temperature.

On the other hand, air fryers use infrared radiation to heat up the air inside the appliance, cooking food with hot air rather than microwaves. As a result, microwave ovens tend to have higher levels of radiation than air fryers.

Furthermore, since air fryers only emit radiation when they are turned on and positioned very close to the food, the risk of exposure is lower compared to microwaves. Despite this, it is still important to follow safety guidelines and keep any kitchen appliances clean and properly maintained. Ultimately, while both appliances involve a level of radiation concern, it is likely safer to use an air fryer in terms of exposure risks.

How does an air fryer’s radiation concern compare to a deep fryer?

Air fryers have recently become a popular alternative to traditional deep fryers, but there may be some potential concerns about radiation. How does this compare to the radiation emitted by a deep fryer? The good news is that air fryers emit considerably less radiation than their deep-fried counterparts.

This is because air fryers use convection technology to circulate hot air around the food, while deep fryers use electromagnetic radiation from heating elements.

However, it’s important to note that all cooking appliances emit some level of radiation, and it’s always a good idea to follow the manufacturer’s instructions for safe usage and keep your frying appliance at least 6 inches away from any heat-sensitive materials.

Overall, an air fryer may be a safer choice when it comes to radiation concerns compared to a deep fryer. But as with any kitchen appliance, it’s important to use caution and common sense during operation.

While air fryers have become increasingly popular in recent years for their ability to produce crispy, flavorful food with little to no oil, concerns have been raised about their potential effects on human health.

The high temperatures used in air frying can lead to the formation of harmful compounds known as advanced glycation end products (AGEs). AGEs have been linked to increased inflammation and a higher risk of chronic diseases such as diabetes and Alzheimer’s disease.

In addition, air frying may not necessarily reduce the overall amount of fat in the final dish, as it often requires the food to be coated in oil before being placed in the fryer. While occasional use of an air fryer is unlikely to cause major health issues, it’s important to consider these potential risks and incorporate a variety of cooking methods into your overall diet.

Will air fryers make you sick?

The short answer to this question is no, air fryers will not make you sick. That being said, as with any type of cooking device, there are certain precautions and best practices that should be followed in order to ensure the safe preparation of food.

One concern with air fryers is the potential for uneven cooking, so it’s important to follow the directions for your specific model and regularly check for doneness.

Another key factor in avoiding illness is to properly clean and maintain your air fryer, including washing detachable parts after every use and carefully wiping down the interior and heating elements. As long as these steps are followed, an air fryer can be a safe and convenient addition to your kitchen routine.

Are you concerned about the potential health risks of cooking with plastic materials? So, are air fryers BPA-free? The good news is that many air fryer manufacturers have started using BPA-free materials in their products. However, not all air fryers on the market are BPA-free, so it’s important for consumers to do their research before purchasing.

One way to ensure that your air fryer is BPA-free is to look for certification from a reputable third-party organization, such as the Greenguard or NSF International. Additionally, some non-plastic materials, such as ceramic and stainless steel, are inherently free of BPA and other potentially harmful chemicals. So consider investing in an air fryer made with one of these materials for added peace of mind. Overall, with a bit of careful shopping and awareness, it’s possible to find an air fryer that is both convenient and safe to use.

While it may seem like a harmless kitchen appliance, the surprising answer to the question of whether air fryers contain lead is a resounding yes. In fact, a study published in The Journal of Environmental Science and Technology found that several air fryer models had above-recommended levels of lead in both the coating on their baskets and even in their food after use. This is particularly concerning considering that lead exposure can lead to serious health issues, including cognitive impairment and reproductive problems. So before you start using your air fryer on a regular basis, make sure to check for lead content or opt for a lead-free model. Your health will thank you.

Can you get Salmonella or E-Coli from an air fryer?

Can using an air fryer lead to foodborne illnesses like Salmonella or E. coli? The short answer is yes, if the proper precautions aren’t followed. The high heat of an air fryer can kill harmful bacteria on properly cooked meats, but it’s important to ensure the meat is cooked to the correct internal temperature before consuming. Any raw or undercooked food, including breaded and pre-packaged foods like frozen chicken tenders, may still contain harmful bacteria that can cause illness. Furthermore, cross-contamination with raw meats can also increase the risk of bacterial growth. As with any cooking appliance, it’s crucial to follow proper hygiene and safety guidelines in order to prevent foodborne illness. This includes washing hands before and after handling raw meat, thoroughly washing produce, and properly cleaning the air fryer basket and other surfaces after use. By following these steps, you can safely enjoy all the benefits of your air fryer without worrying about illness-causing bacteria.

How do I prevent acrylamide in my air fryer?

Acrylamide is a chemical compound that can be found in high-temperature cooked foods, such as French fries and other fried snacks. While research suggests that acrylamide may have potential health risks, it can be easily prevented in air fryers. The key is to make sure your food is not overly crispy or burnt. To do this, try pre-heating the air fryer before cooking and flipping the food occasionally during cooking. Additionally, avoid overcrowding the fryer basket to ensure more even cooking. Using marinades and seasonings can also add flavor without burning the food. By following these tips, you can continue to enjoy tasty air fried snacks while reducing your intake of acrylamide.

How To Reheat Crab Rangoon In Air Fryer